During that period, upheaval in commodity production led to steep increase in world food prices, with the United Nations’ Food & Agriculture World Food Price Index surging to a record in February 2011, up 37% from the end of 2009. 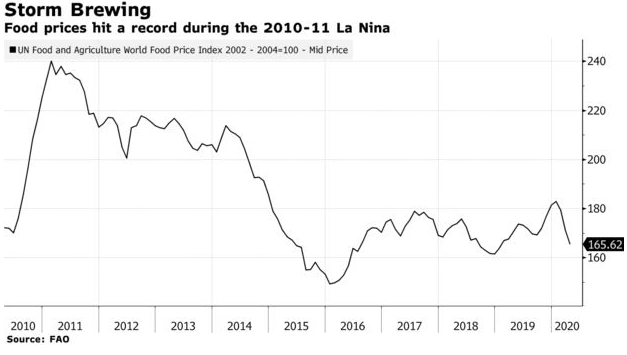 La Nina typically affects a broad range of farm commodities, as it brings above-average winter-spring rainfall in Australia, particularly across eastern, central and northern regions, as well as in Southeast Asia, with the potential for flooding.

It can also dry out the southern U.S. through winter, bringing cooler temperatures and storms across the north. In South America, croplands in Argentina can become more arid, with drought possible across parts of Brazil.

The 2010-11 La Nina brought Australia’s wettest two-year period on record, according to the country’s Bureau of Meteorology, and with it a strong 2011-12 winter wheat crop. This season, the crop could climb 78% year-on-year to 27 million tons, the USDA FAS said in July.

“A wet spring will support pasture development and grain fill for the winter crop,” Rabobank said in its September agribusiness report. “However, if wet conditions continue into harvest, it can reduce crop quality.”

A late-season La Nina is unlikely to have any impact on the current winter crop in Australia, forecaster Abares said in its June outlook. The country’s harvest of grains including wheat and barley is due to start within weeks.

La Nina may also exacerbate a bout of dryness in Argentina, jeopardizing what was supposed to be a record wheat crop in one of the world’s top exporters.

Soy growers in the U.S. might escape
damage, with harvests typically complete by November. Brazilian soy may
be more at risk “if drought and high temperatures weaken conditions for
planting, which stretches from mid-August to mid-December,” said Tai.

The U.S., Brazil and Argentina account for about 80% of
soybean production and smaller harvests can raise prices, according to
Tai. In the 2011-2012 season, Brazil’s soy production declined 12%. 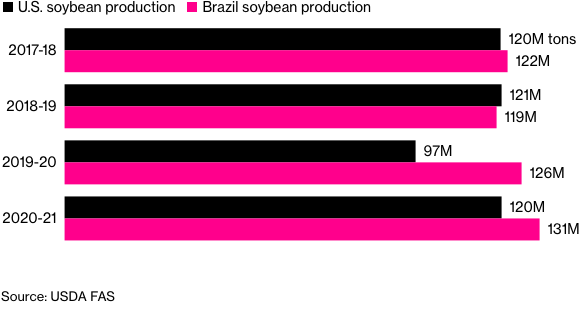 There has already been more
rain in Southeast Asia, particularly in Sabah and Kalimantan, since
June, said Ling Ah Hong, director of plantation consultant Ganling Sdn.
La Nina’s impact on the palm crop would depend on how strong it is, Ling
said.

“A weak to moderate La Nina is usually beneficial to palm
production in the following year,” he said. “However, the heavy rains,
if any, may cause immediate short-term disruption to harvesting and crop
quality.”

A Question of Strength

Palm oil production usually declines in December and January, after rising in August and September, said Derom Bangun, chairman of the Indonesian Palm Oil Board. More rain in those typically drier months could be positive for monthly output, providing conditions aren’t extreme, he said.

La Nina and El Nino events can lead to steep differences in coffee prices. During the last big La Nina, arabica prices surged as much as 127% between 2010 and 2012, while robusta gained as much as 105%.

Arabica is mostly grown in Brazil, which can be hit with drought during La Nina, while the premium narrows during El Nino years, as robusta crops in Vietnam and Indonesia are hit by drought, said Tai.

The coffee output from Brazil, Colombia and Indonesia fell 5-10% during the same period, while Vietnam’s output climbed as more areas were planted with beans, Tai said.

La Nina tends to bring adverse above-average rains to many parts of Colombia, and its effect may start to show up from October to December, said Roberto Velez, chief executive office of Colombia’s National Federation of Coffee Growers.

While that may benefit areas that traditionally get less rain, the darker days caused by excess clouds reduce the luminosity necessary for flowering to occur, eroding overall yield potential.

Higher humidity can also trigger outbreaks of coffee-leaf rust, which happened between 2010-12, curbing output. However, about 80% of the plants in the second-largest arabica producer are now resistant to rust, compared with a very low percentage during the last La Nina, he said. 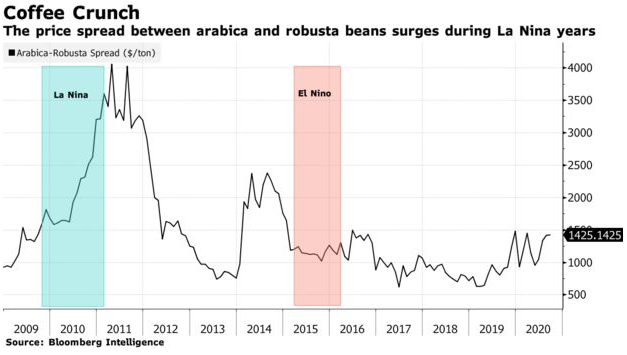 Still, Indonesia’s coffee production may decline, as the rain causes coffee cherries to fall or rot, especially if rain occurs more than 10 days straight, said Moelyono Soesilo, head of specialty coffee and processing at the Association of Indonesian Coffee Exporters and Industries.

Sugar output from Australia, Brazil and Thailand could be affected, Tai said. Drought could cut production in Brazil, with yields down 12% during the last big La Nina. In Australia, it’s heavy rain in the country’s north that could create harvest delays.

The crush is almost half way done in Australia’s growing regions and “La Nina years can bring an unwanted wet end to the domestic crushing season,” said Charles Clack, a Rabobank commodities analyst, in the September report.

For cotton, drier-than-normal conditions in southern and western Brazil and northern Argentina could have a negative impact on crops there, while more rain could benefit Australian fiber, according to Donald Keeney, senior meteorologist with Maxar in Gaithersburg, Maryland.