The Virus Is About to Hit Banana Supplies Next

Get your potassium while you can.

The coronavirus pandemic may limit supplies of bananas in Asia. Growers in the Philippines, the world’s second-biggest exporter, said overseas shipments may drop by nearly 40% this year as lockdowns and social distancing measures curb output and transport.

The country’s exports of the fruit are expected to plunge to about 2.5 million tons this year from 4 million last year, said Stephen Antig, executive director of the Pilipino Banana Growers and Exporters Association. Producers, including Unifrutti Tropical Philippines Inc., have halted some operations, he said.

“Bananas have to be harvested every day,” said Alberto Bacani, president of Unifrutti Philippines. “By the time we come back, a lot of that fruit will be spoiled and will have to be thrown away.”

The Philippines accounted for an estimated 20% of global banana shipments in 2019 and about 90% of total export volumes in Asia, with its two major markets being China and Japan, according to a 2020 report from the Food and Agriculture Organization of the United Nations. Ecuador is the largest exporter.

The country’s main island of Luzon has been under a lockdown since mid-March that will last through the end of April. Provinces in the southern Philippines, which is home to many plantations, have also imposed quarantine measures. Exports of the fruit will continue to be impacted after restrictions are lifted, according to Antig, as social distancing measures are expected to remain in place that limit the number of workers.

Agriculture Secretary William Dar on Wednesday urged local governments, particularly in Bukidnon province where several banana farms and packing houses are located, to allow farmers, fishers, and employees of food processing and manufacturing facilities to work to avoid artificial food shortages and price spikes. If the Bukidnon lockdown, which is scheduled to run April 13-26, is eased, the country could export 3 million tons of bananas this year, according to Antig. 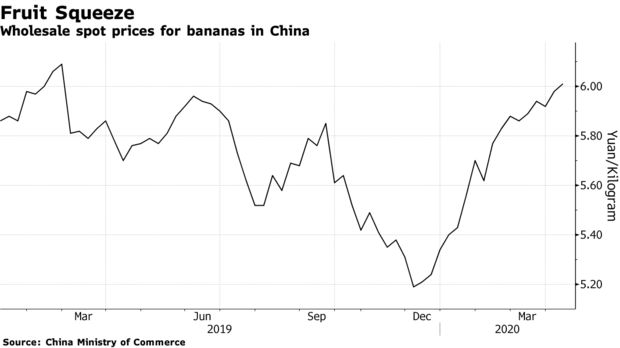 Bacani said Japan banana imports may be impacted because many farms that export the fruit to the East Asian country are under quarantine. “In the next two weeks, you will see a drastic reduction in the banana volume in Japan,” he said, while adding that other exporters like Ecuador may fill in the gap.

Yuko Yamada, a spokeswoman for the Japan Banana Importers’ Association said the country depends heavily on imports from the Philippines but she wasn’t aware of shortages or price increases, or any notices from Philippine exporters that shipments will be reduced.

Meng Wei, an official with China Fruits Marketing Association, said the group hasn’t noticed any change in Philippine banana imports but noted that domestic production of the fruit and imports from Myanmar have increased.

— With assistance by Aya Takada, and Shuping Niu

(Updates with details of provincial lockdown in seventh paragraph and chart.)