Farming is a business; an enterprise that meets a fundamental need of humanity, but a business nonetheless.  As with all businesses, we need to deliver large numbers of the highest quality product using the least amount of resources to generate acceptable profit margins.

In farming, water is an expense and often a scarce resource that needs to be conserved.  70% of water in developed countries and 90% in developing countries is used for irrigation.  Clearly, minimizing water use has become a world-wide imperative and SupPlant is leading the way on using water judiciously.

As everybody knows, technology companies thrive or die based on their research and development projects.  Any successful technology is constantly evolving and improving based on the results of testing and trials.  SupPlant is no different.

Based on their high-profile successes in water conservation, SupPlant was tapped in 2018 to conduct a wide-ranging agronomic research project based on their Growth-Based Irrigation Technology (GBI™); the largest irrigation experiment ever financed by the National Mango Board.  The results were nothing short of astounding.

The objective of the experiment was to develop an irrigation protocol suitable for tropical countries supported by highly advanced technology like SupPlant’s autonomous irrigation system.  SupPlant chose an existing, mature mango plantation used by Simply Natural in northern Peru for their test site.

Any scientific research project that tests new technology or approaches to solving a problem starts with a very basic premise – comparing the results based on the existing protocols (the placebo) with the results from a new approach or process.  Using mature, 9-year old mango trees, SupPlant continued using flood irrigation for half the plantation (basically a ditch filled with water that runs alongside the rows of trees) and installed their cutting-edge GBI technology on the other half.  They SupPlant system includes a drip-irrigation network that goes right to the root ball of the tree; weather stations located throughout the farm that measure humidity, wind, precipitation, solar radiation and temperature; and sensors placed in the trunk of representative trees, in the soil, on leaves and on the developing fruit.  All of this data is collected very 10 minutes to produce the irrigation commands.

To see a video about Mango Board research completed by SupPlant, click HERE. 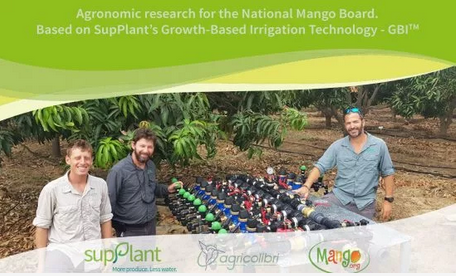